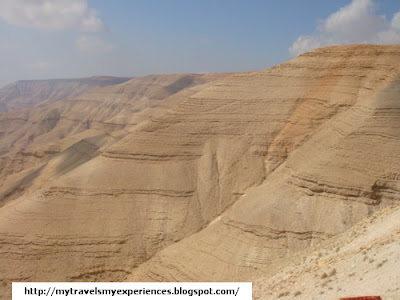 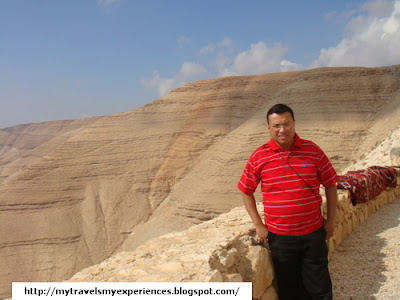 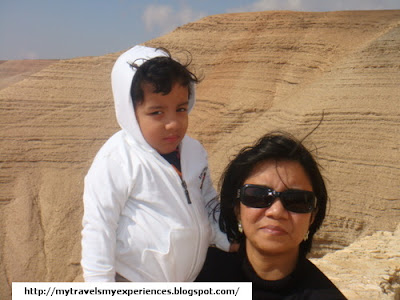 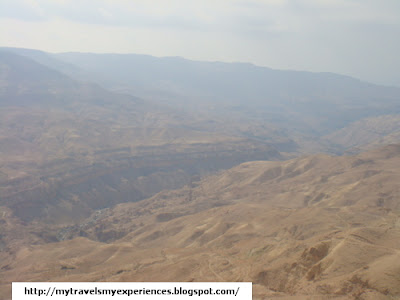 Our trip to Wadi Al-Mujib was an unforgettable experience. The great wide valley with magnificent geological formations will take your breath away.
The place itself is a great experience to be in or to see the scenery from the top of the mountain. 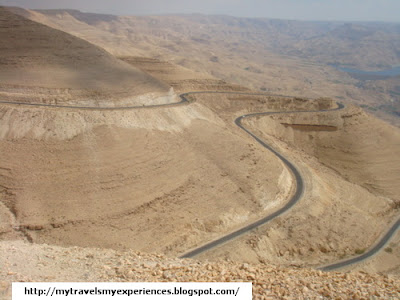 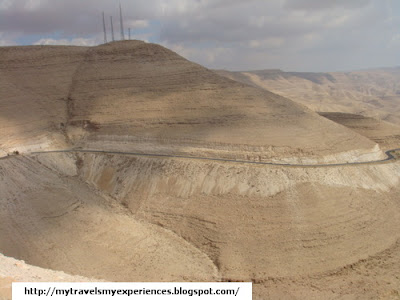 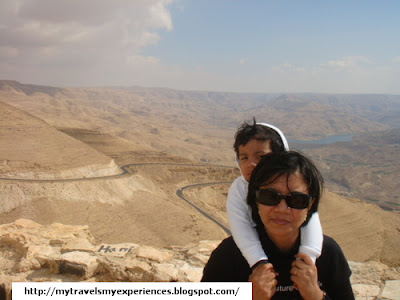 Using the “King’s Way” we reached Wadi Al Mujib. The King’s Way was built some 4000 years ago to enable trade and to facilitate Roman military movement. It’s the world’s oldest highway and is indeed the most prominent one in Jordan today. The road runs 450 kms from Syria up north to Aqaba down south.
Wadi Mujib is a gorge in Jordan which enters the Dead Sea at 410meters below sea level. 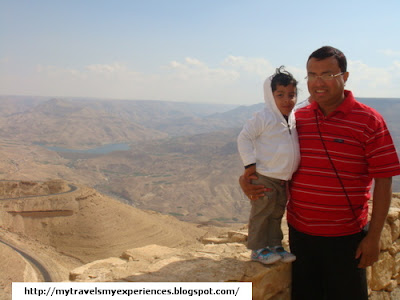 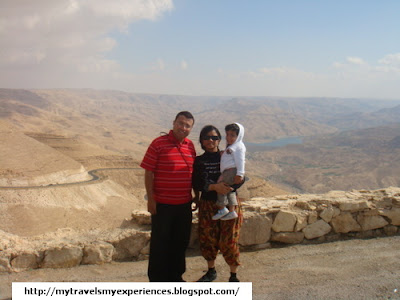 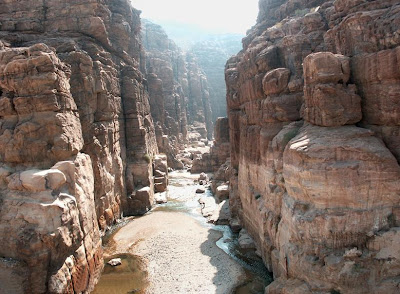 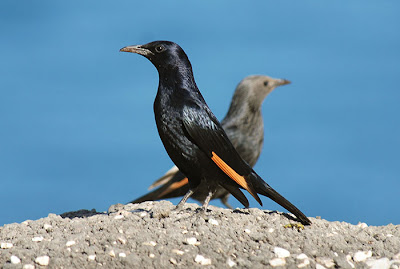 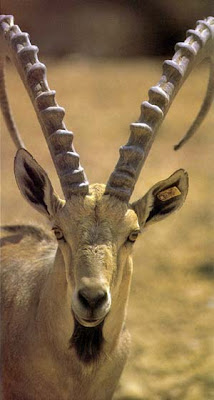 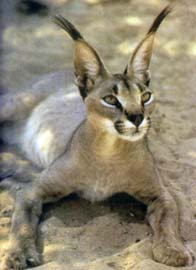 The Mujib Reserve is the lowest nature reserve in the world, with its spectacular array of scenery near the east cost of the Dead Sea. The reserve is located within the deep Wadi Mujib gorge, which enters the Dead Sea at 410 meters below sea level. The Reserve extends to the Kerak and Madaba mountains to the north and south, reaching 900 meters above sea level in some places. This 1,300-meter variation in elevation, combined with the valley's year- round water flow from seven tributaries, means that Wadi Al Mujib enjoys a magnificent bio-diversity that is still being explored and documented today. Over 300 species of plants, 10 species of carnivores and numerous species of permanent and migratory birds have been recorded until this date. Some of the remote mountain and valley areas are difficult to reach, and thus offer safe havens for rare species of cats, goats and other mountain animals. Many carnivores also inhabit the various vegetation zones of the Mujib area.  The caracal, for example, a medium-sized cat with black and white ear-tufts, lives in its rocky wadis.  The caracal is a powerful and agile hunter with an incredible leaping capacity – able to catch wild birds in its paws.  These and many more animals are now being harboured within the Reserve. 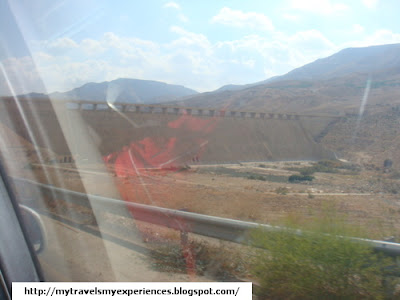 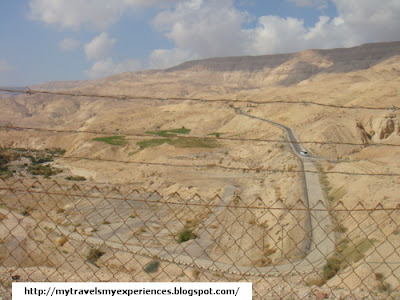 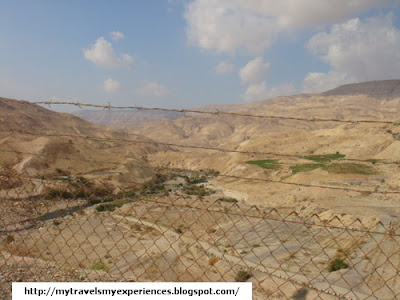 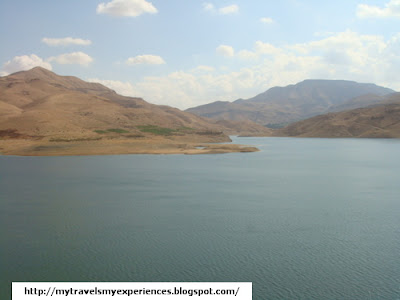 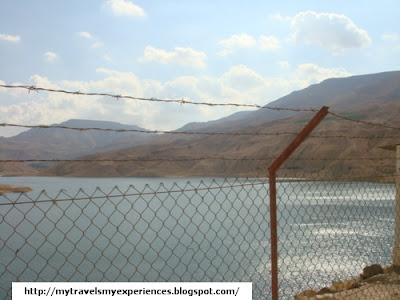 A large dam was recently finished at the bottom of the wadi, where the modern road crosses the river. As a result, a large lake has formed. Today, Wadi Mujib is fed by seven tributaries.
During the last Ice Age the water level of the Dead Sea reached 180 m below sea level, about 230 m higher than it is today. It flooded the lower areas of the canyons along its banks, which became bays and begun to accumulate sediments. As the climatic conditions changed, about 20,000 years ago, the water level of the lake dropped, leaving the re-emergent canyons blocked with lake marl. Most canyons managed to cut through their plugged outlets and to resume their lower courses. However, Wadi Mujib, the biblical Arnon River, abandoned its former outlet by breaking through a cleft in the sandstone. This narrow cleft became the bottleneck of an enormously large drainage basin with a huge discharge. During the years the cleft was scoured deeper and the gorge of Wadi Mujib was formed.
The Mujib reserve consists of mountainous, rocky, and sparsely vegetated desert (up to 800 m), with cliffs, gorges and deep wadis cutting through plateaus. Perennial, spring-fed streams flow down the wadis to the shores of the Dead Sea which lies 400 m below sea-level.
The slopes of the mountaineous land are very sparsely vegetated, with a steppe-type vegetation on plateaus. 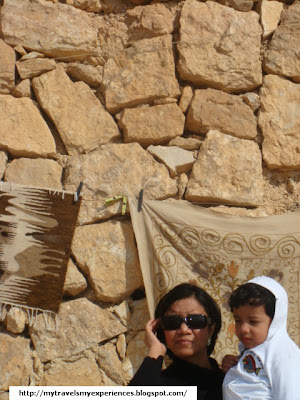 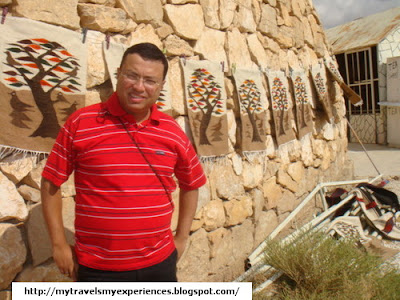 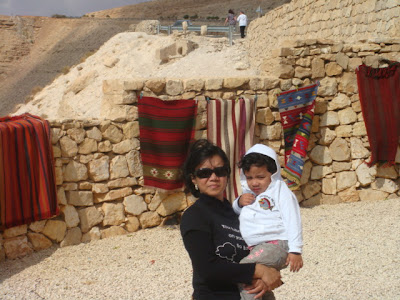 You will find lot of hand woven wall hangings, carpets made and sold by the Bedouins. They are nice buy....keep them as souvenir or use them!
The hot springs of Hammamat Main lie close to the borders of the reserve are heavily used for tourism/recreation.
The Jordanian military have a temporary camp in the south of the reserve.
Posted by PARIMITA at 3/22/2012 12:29:00 PM