Return of the Iron Man,KUWAIT 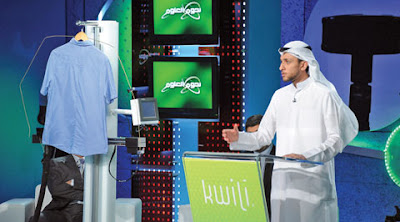 For those who do not like ironing clothes and find it annoying, there will soon be a solution – easy ironing done by a robot without much effort. Within two years, there will be a new ironing model in the market, which was invented by a young Kuwait inventor, Mohammed Al-Rifai.
Al-Rifai presented his invention on the popular reality TV show ‘Stars of Science’ and was ranked the third top inventor in the Arab world.  Realizing this invention was not easy for him, and he had to work hard to come up with this automatic ironing robot. But ‘Kwili’ will simplify the ironing work of many people.
Mohammed Al-Rifai is a student at the Faculty of Electrical Engineering at Kuwait University. He had to skip a semester to participate in the program, which was four months long. He was inspired to invent the brand name of his robot, ‘Kwili’, from the Arabic word ikwi (ironing).  “And it’s also easy to pronounce in English – Kwili also stands for (Kuwait I Love It),” inventor Mohammed Al-Rifai told Kuwait Times.
Kwili is now available in the first prototype, which will be improved before being manufactured. “The machine is the first automatic ironing machine that deals with all kinds of fabrics including cotton, silk, satin and others. It can also iron all kinds of outfits including shirts, pants, traditional robes and overcoats and other garments. Furthermore it copes with all sizes of outfits, from XS-XXL. To improve it, we may enlarge it to make it suitable even for XXXL. Of course it can iron children’s clothing, as the hanger is flexible,” he explained.
As part of developing Kwili, an additional hanger may be added to the machine. “The clothes may not be ironed if not tied. And this hanger ensures flatting the outfit to be ironed properly. It takes only a few seconds to hang it, and the robot works alone without any assistance. Also, as a part of the development, I will improve it to take more than one piece at one time to save time,” he added.
The user of the robot only needs to press a button to choose the kind of fabric to be ironed and the machine works independently. “There is an additional option in this machine, as the user may add an ironing program or customize the ironing process, which is special for certain outfits such as delicate evening dresses. The robot will then save this setting and remember it, so the next time the user only needs to enter the past ironing operation without further steps,” stressed Al-Rifai.
Al-Rifai did not forget safety measures in his invention. “First of all the machine will not start without unless it has clothes inside it. It only irons within the border of the piece fitted in, so no steam will emit from outside the border of the piece. Also, after the piece is removed and the machine is still hot, the metal rod moves high out of reach as a safety measure. In the future, I will change the square base with a curved shape for the safety of children,” he noted.
The idea of participating in ‘Stars of Science’ came from Al-Rifai’s friends and family members, especially those who were studying at the university. “There was a poster on the wall inviting talented people to participate. As they all know my love for invention and my ambition to invent something useful, they encouraged me to register and I did. I was accepted as one of 30 participants who were chosen from 7,000 applicants for the program,” he said.
Kwili took him four months of continuous work to realize his project, the entire duration of the program. “I had the theory on paper, and realized it during the program. I made five machines in the beginning before I made the model that I have now. It was very hard and I made mistakes and corrected them. During the program, there were experts from each field to help the participants and save their time. The program consisted of different phases starting from the Proof of Concept, Engineering Phase, Design Phase, and finally the Business Phase,” explained Al-Rifai.
Al-Rifai registered a GCC patent for Kwili in Qatar and is now in the process of registering it internationally in Kuwait. “I did not correspond with international factories or brands that will definitely offer to buy the invention, as I want it to be a Kuwaiti product even if I manufacture it abroad. It is not easy to market it locally, so I received support from public institutions such as the Scientific Club and Sabah Al-Ahmad Centre,” he stated.
The price of Kwili’s first prototype is about KD 350. To make it affordable in the market, after modifications and improvements, the price will be around KD 150. Al-Rifai is also working on two other inventions that should be realized during this year.
He also participated with a group of students at Kuwait University to establish the ‘Robotics and Automation Society’ there. “This society is cooperating with other universities, and is supporting creative students. In 2011, we held a robotics competition to spread the robotics culture in the Kuwaiti community. We aim to develop Kuwait into an industrial country,” concluded Al-Rifai.
By Nawara Fattahova, Staff Writer
Kuwait Times
Posted by PARIMITA at 3/16/2012 07:13:00 PM

Kuwait has so many attraction points that people should visit during travel. It's The Liberation Tower, The Kuwait Towers, National Museum, Failaka Islanda, Entertainment City and so many other.