Our Visit to Kerak Castle,JORDAN

From Wadi Mujib , we drove forward to reach the town of Kerak,the location of the famous Kerak Castle. 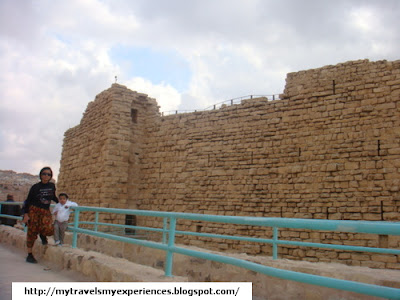 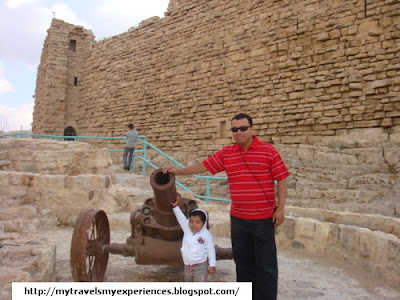 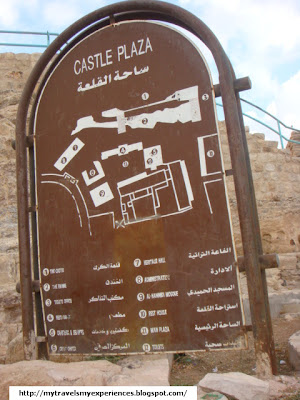 The castle map at the entrance....read it before exploring the castle....will be of great help 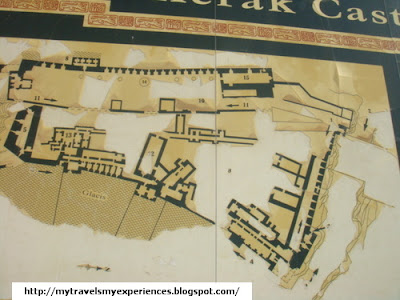 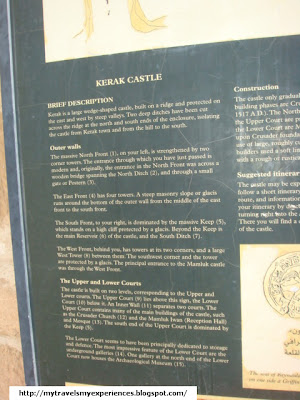 History of Kerak Castle...read it....great help to know the castle and the place
Kerak was the capital of the Biblical kingdom of Moab. Perched atop a steep hill, Kerak is a predominantly Christian town dominated by the largest and best preserved of the Crusader castles in the region.
Standing 900 meters above sea level, the castle was built by the Crusaders in 1142 AD. Crusaders essentially were from Germany, Belgium, France and some other parts of Europe. Karak castle is a dark maze of stone-vaulted halls and endless passageways. The castle offers an impressive insight into the architectural military genius of the Crusaders. 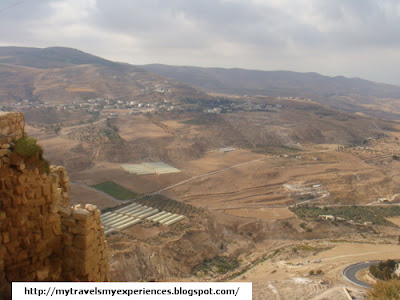 View of the town from the castle 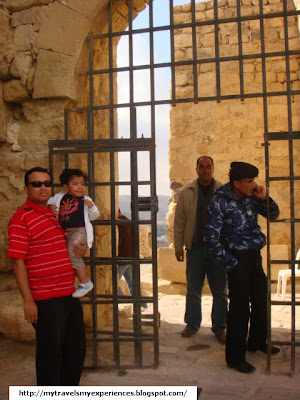 Main Entrance Gate
While the castle we see today essentially dates back to the 12th century, Kerak has been a fortress since Biblical times. The Bible relates how the King of Israel and his allies from Judah and Edom ravaged Moab and besieged its King Mesha in the fortress of Kir Heres, as Kerak was then known.
Centuries later, it took the Crusaders some twenty years to erect their vast castle. Once finished in 1161, it became the residence of the Lord of Transjordan, by then the most important part of the Crusader kingdom, rich in produce and tax revenues. After withstanding several sieges in the early 1170s, Kerak came under the rule of Reynald of Chatillon, a lord who became known for his recklessness and barbarism. Breaking all treaties, he began looting merchant caravans and Mecca-bound pilgrims, attacked the very homeland of Islam – the Hijaz – and raided Arabian ports on the Red Sea, even threatening Mecca itself. Saladin, the ruler of Syria and Egypt, reacted swiftly. He took the town of Karak by force, burned it down and almost managed to storm the castle as well. 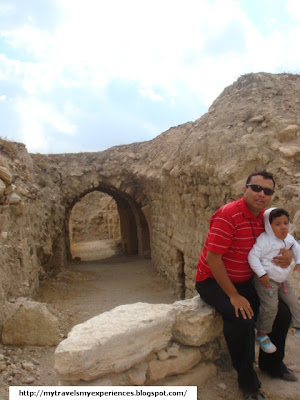 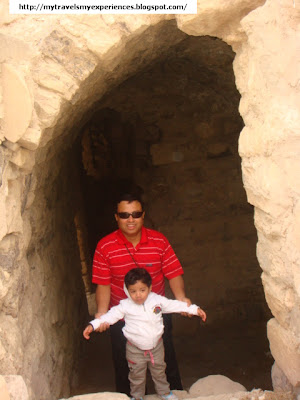 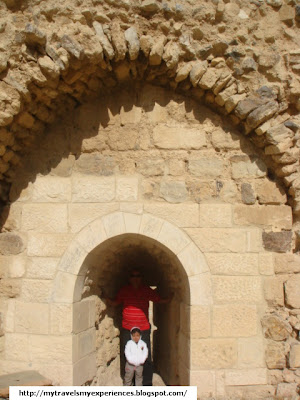 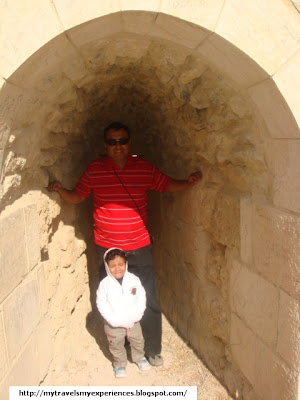 The various tunnels and passages
Kerak Castle is a typical example of Crusader architecture, with Romanesque-style stone vaults, numerous corridors, and strong doorways. The Crusader parts of the ruins are mostly on the upper level and can be identified by their dark volcanic tufa; later Arab additions are in white limestone.
Through a massive door (ask at the ticket office), steps lead down to vast, dimly-lit, vaulted rooms and corridors underground.
The upper courtyard includes the remains of a Crusader chapel and provides excellent views over the Jordanian landscape to the Dead Sea.
The west wing of the complex is home to the small Kerak Archaeological Museum, which displays artifacts excavated at the site. 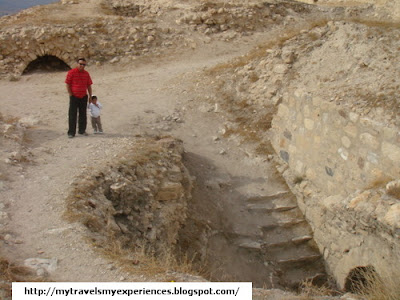 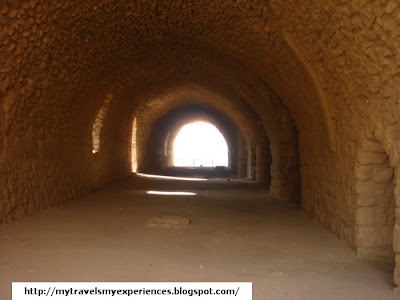 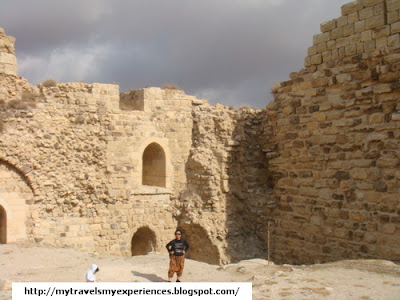 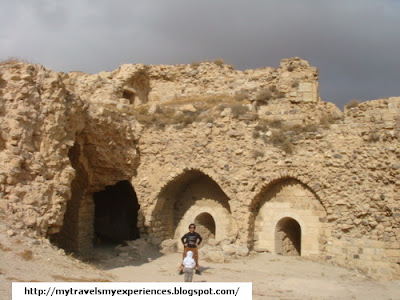 Walls of the castle made of strong big stones 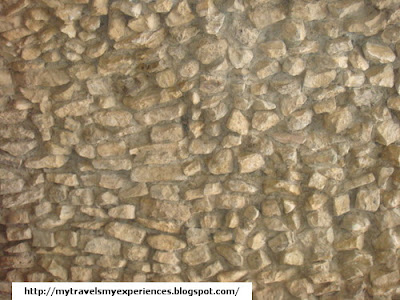 The big stone of the walls 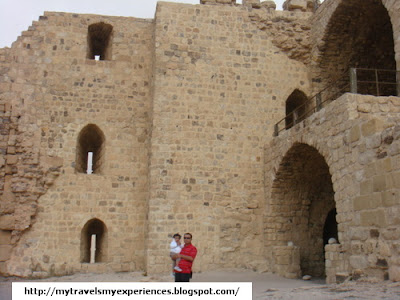 We took nearly 2hrs to explore nicely the castle. We enjoyed walking, exploring, clicking pictures of the  tunnels, corridors, strong stone walls of the castle and the stone vault of the castle chapel. Even my daughter (2yrs 3mnths then) loved to walk and move around. 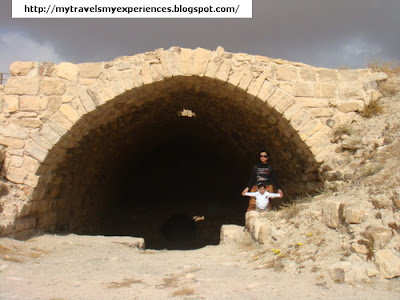 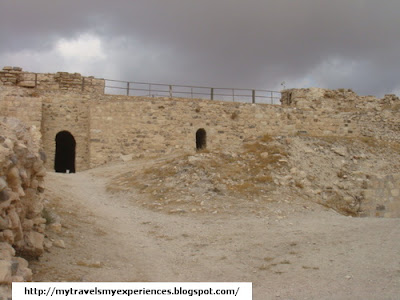 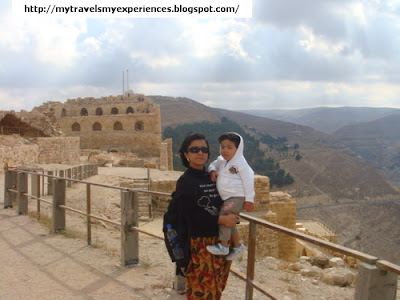