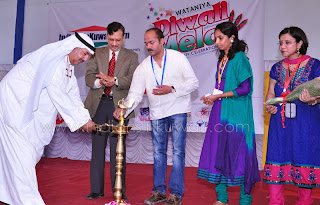 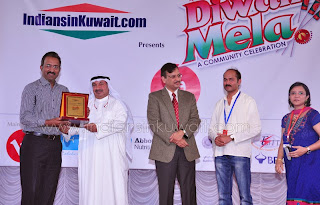 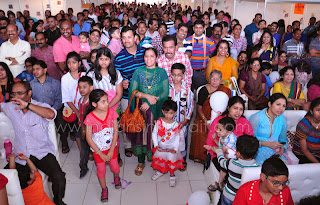 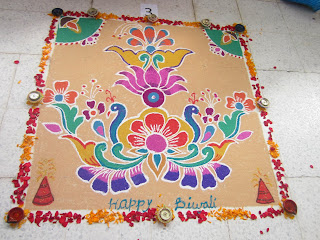 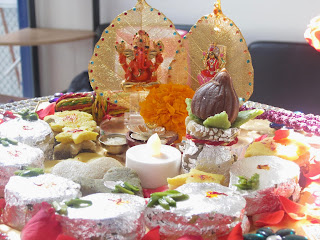 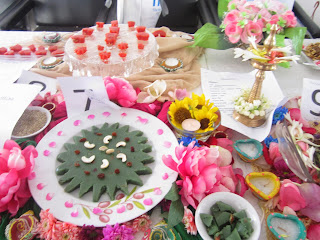 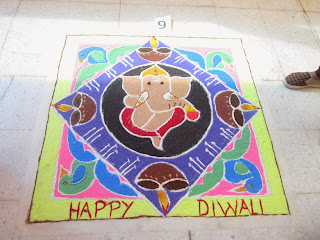 The Mega Community celebration IIK Diwali Mela 2013 organised by IndiansinKuwait.com lit the hearts of the Indian Community here in Kuwait on Friday, 8th November 2013 at Salmiya Indian Model School. The Diwali Mela by IIK brought people from various states across India to celebrate the ‘Festival of Lights’ with gaiety and enthusiasm.As the name suggests Diwali Mela, was indeed a gathering of all Indian Associations and people from all walks of life who enjoyed the Carnival atmosphere with plenty of Food, Entertainment, Diwali Gifts, Shopping and games.The event started with salutation to both Nations Kuwait and India by playing their respective National Anthems. The Mela was officially inaugurated by Mr. Balram Kumar Upadhyay, Consular & Chief Welfare Officer, Indian Embassy, Kuwait in presence of Mr Ali Al Sayeg, Chairman Lemonade International and Mr Sunoj Nambiar, Director IndiansinKuwait.com. Sponsors of the event were given token of appreciation by IIK. The Main Sponsor for the Event was Wataniya Telecom, Tik Tok was the Gold Sponsor, Abbott Nutrition - Pediasure Complete was the Silver Sponsor. Associate sponsors were Oriental Insurance, Eternity Int'l Travels & Tourism and BEC - Bahrain Exchange Company also received mementos from the chief guest. All Participating Associations were also felicitated by IIK. AMMA Kuwait, Maharastra Mandal Kuwait, Kuwait Odisha Association and Telugu Kala Samathi were the participating Association. D'illusion group was also felicitated during the inauguration.
The Mela brought all Indian Associations together in a common platform to showcase their rich culture through various programs and stalls. People were welcomed by the beautiful Rangoli by Wataniya wishing everyone a Happy Diwali. The venue was a complete festive mood with Diwali Torans hanging at the enterance and other elegant decorations. Rangoli competition held in the morning gave the festive beginning to the Mela. Around 11 teams participated in Wataniya Rangoli Competition in which Rangoli made by Mrs Dipali Akshaykumar and Team bagged the First Prize while Mrs Archana Subodh and Team and Mrs Devi Suchitra and Team won the Second and Third Prizes respectively.Diwali Methai Contest, Fancy dress competition, DJ Session, Magic Show, Face painting were some of the attractions of this Mela. Various Stalls had diwali offers which people could utilise and enjoy.The Diwali Mithai competition was a unique experience. It was held for the first time at the Diwali Mela. More than 35 participants, mostly the ladies, made tasty Diwali sweets and presented it with beautiful decorations. The judges found it extremely difficult to judge the Diwali Mithai contest. Mrs T. Jayasri won the First Prize while Mrs Laxmi Mishra and Mrs Kavita Balamurugan won the Second and Third Prizes respectively.Colourful and attractive Diwali Lanterns made by the students of various Indian schools were exhibited at the Mela. Ms Helen Mariam Biju, III Std from Indian Central School got First Prize in Diwali Lantern making competition while Ms Aafia, Ms Pranathi of IV Std from Salmiya Indian Model School got Second Prize and Ms Sonali Rane of XI Std from FAIPS - DPS bagged Third Prize.
The Magic Show by Magician Mr. Prasun (Jewel) was an interesting treat especially for the kids. Kids enjoyed the huge play-area arranged at the Mela where attractive slides and swings were there for them.
The event did not end there. The Dandiya Raas at the end for the audience kept the entertainment going. The whole family gathered at the Diwali Mela participated in the Dandiya Raas. Dandiyas were provided by Wataniya. The mood recreated the true Indian festive atmosphere at Salimya Indian Model School premise.Finally, IIK Officials informed that the Diwali Mela 2014 will be back next year on Friday, October 17th 2014.